It was a pleasure to welcome Alex Norris MP (Labour) for Nottingham North to our pharmacy (Mistry’s) on 3rd October 2017.  He was able to see first-hand the key role community pharmacies play in providing a quality healthcare service for the local community. He witnessed the pharmacy offers a wide variety of services from

self-care, to giving appropriate advice, and dispensing of prescribed medicines.  Despite being extremely busy the pharmacy team went out of their way to solve patients problems from prescribed medication, phoning GP practices, chasing up missing prescriptions, and phoning wholesalers trying to source medication that were in short supply. He was amazed the complexity of work and how difficult it is to manage time with the ever increasing work load.

Between Nick Hunter, Chief Officer of Nottinghamshire LPC, and myself we made Alex aware that due to the NHS budget cuts pharmacy funding has been reduced.  This coupled with the cuts in some of the locally enhanced services (and more to follow) is beginning to affect the viability of pharmacy business, especially for the independent contractors.  This is not only disadvantageous for the patients but it also places more pressure on the GP and hospital services.

In his closing remarks Mr Norris accepted the challenges community pharmacy face in the recent financial climate and agreed he could be contacted again in the future by the LPC or by myself should there be a need.

Chris Leslie MP had a great pharmacy visit last Friday (09.12.16) – he spent over two hours at the pharmacy and surgery along with Nick Hunter, Chief Officer for Nottinghamshire LPC.
He visited Well Pharmacy, St. Ann’s Nottingham and met the team there where they covered aspects of the cuts and value of pharmacy. 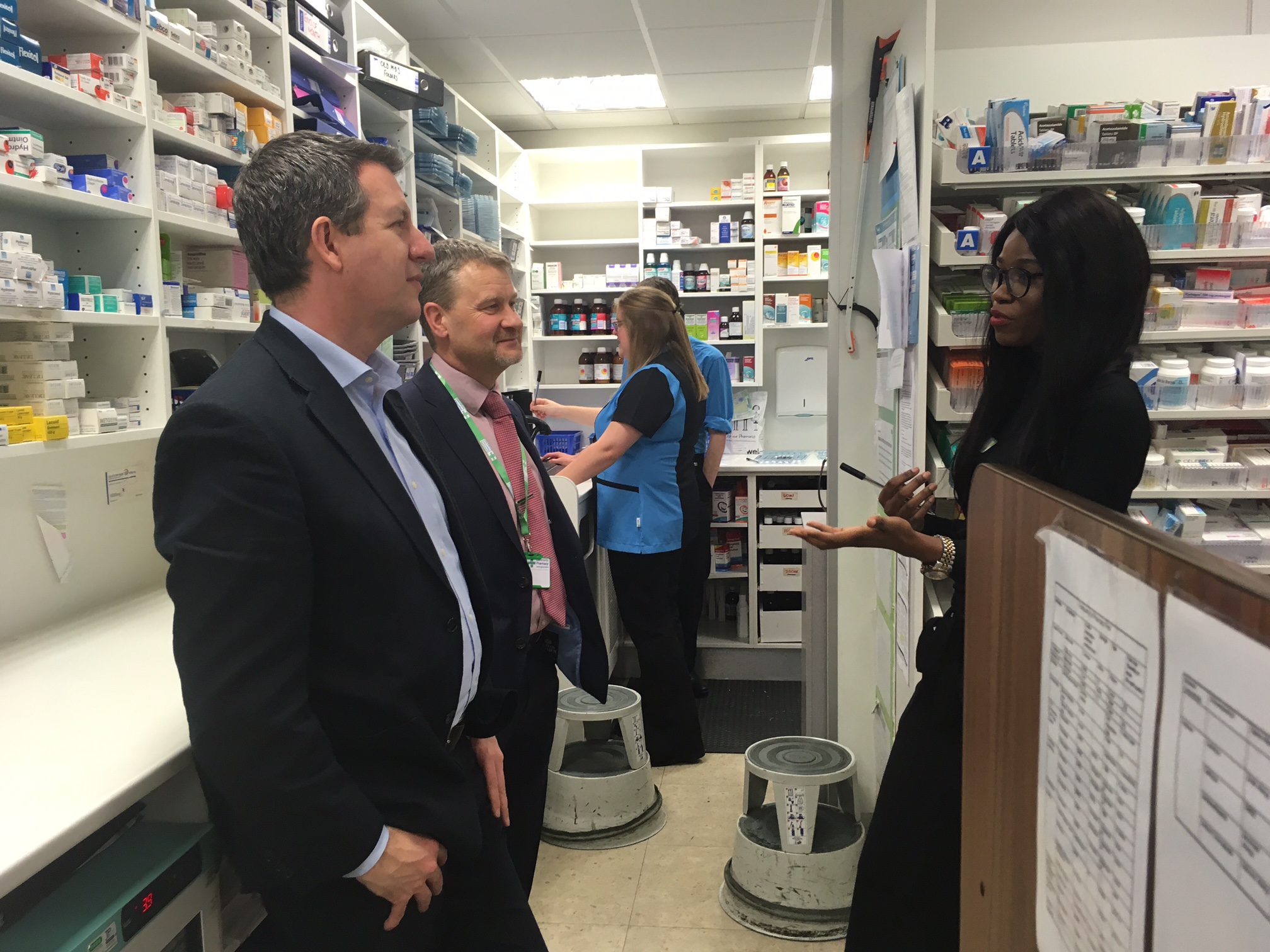 The adjoining surgery (Wellspring) is one of those involved in the Notts/Derby IP project so we took the opportunity to introduce Chris to Nitin Lakhani (independent pharmacy owner), the community pharmacist IP working in the surgery. Nitin offered Chris the opportunity to sit in on a consultation so took him in to the surgery to show him some of the positive aspects and how greater integration can help both general practice and community pharmacy.

Visiting a pharmacy in Heathfield

Gordon Heeley, Pharmacist and Treasurer for the LPC and Nick Hunter, Chief Officer of the LPC also attended.

We will add all the press release and information from pharmacy visits when available.

Please click on the links below to read the accompanying information (press release, letters to parliament etc)

Click here for the entry into Chemist & Druggist Awards 2010

The LPC are currently writing to the new MPs in the Nottinghamshire and Bassetlaw area regarding interest in pharmacy and inviting to visit a pharmacy in their area. If you wish for the MP / Councillor for your constituency to attend your pharmacy with representatives from the LPC please contact me on secretary@nottinghamshirelpc.co.uk.

The list of pharmacies in Bassetlaw open over the bank holiday is available below Please make yourself aware of the...

We are in the early stages of planning the roll out of GP-CPCS – just like 111-CPCS, but the referral...